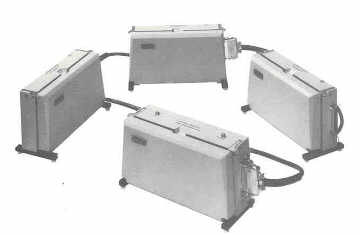 The CP-2 Card Programmer, announced in January of 1969, was a follow-on to the original CP-1 Card Programmer, allowing up to four card readers to be daisy-chained together to allow programs of up to 320 steps to be created. Users of Wang 300-series calculators found the 80-step limit of the original CP-1 Card Programmer frustrating, as their programs in many cases needed to be more than one card in length, requiring manual swapping of cards to allow more complex programs to be written. Another weakness of the CP-1 was that no branching or conditional functions were available, meaning that programs were limited to simple linear flow. With the CP-2, manual punched card swapping was eliminated, and some limited test and branch capabilities were also available.

There were two different card readers that made up the CP-2 system. The required CP-2M (M for Master) was connected to the calculator electronics package and a Wang 300-series keyboard/display unit. The first CP-2S (S for Slave) unit would connect to the CP-2M, and successive CP-2S units would daisy-chain together as shown in the photo above, with up to three CP-2S units connecting in daisy-chain style to each other, and the CP-2M. The CP-2M included special circuitry to recognize additional operation codes that would cause jump and test (branch if display value is negative) instructions to be processed. With this arrangement, rudimentary looping and branching operations could be performed that were not possible with the earlier CP-1 Card Programmer. Wang Labs offered, for "small charge", a return-to-factory modification to the CP-1 Card Programmer that upgraded it to a CP-2S unit.