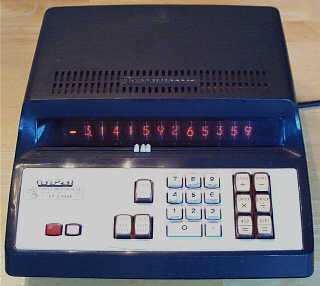 The Commodore 1121, along with a stablemate machine, the Commodore 1161 (with 16 digits of capacity versus the 12 of the 1121), are early examples of Commodore's entry into the market for desktop electronic calculators. This 1121 appears to have been made in the late 1968 to early 1969 time period, based on date codes on the IC devices in the machine. It should be noted here that this calculator was designed and manufactured for Commodore by Casio Computer Co. (as were all of Commodore's early electronic calculators) under the terms of an OEM agreement between the two companies. The transformer in the power supply of the Commodore 1121 has the Casio logo on a label attached to it, and all of the circuit boards have Casio board identification nomenclature (12D) on them, including the text "MODEL 121", in reference to Casio's version of this machine, the Casio 121. The Casio 121, and its higher-capacity sister, the Casio 161 (sixteen digits of capacity but otherwise identical to the 121), were Casio's first electronic calculators to utilize MOS integrated circuits. Previous Casio calculators used all discrete-transistor circuitry with no integrated circuits. It also appears that Casio made a downscale version of the Casio 121 called the Casio 120. This machine did not provide the memory accumulator or round-off capability of the 121. It is not clear if the Casio 120 was marketed under the Commodore OEM agreement with Casio.

The Commodore 1121 uses a mix of metal can-type IC's (10 and 12 pin), and dual inline package (DIP) IC's (14-pin), totaling 60 IC's. There are also a large number of transistors and diodes in the 1121, but the machine is clearly an IC-based machine, not a hybrid (a few IC's, but the majority of the logic made up of transistor/diode logic elements) machine like the Burroughs C3350. The logic of the machine is spread across four 10" by 5 1/2" phenolic circuit boards that plug into an eteched circuit board backplane. The top-most board in the machine contains the display decoding and driving circuitry. The next board has the nomenclature "MAIN" silkscreened on it. This designation is typically used in early Casio calculators to indicate the board with the main sequencing logic. The third circuit board is called the "SUB" board, and, as with other early Casio calculators, it typically contains the arithmetic logic unit. The bottom-most board is called the "REGISTER" board, and contains the shift registers that make up the operating registers of the machine, as well as gating logic that controls the flow of data between the various registers. Individual wire connections provide connectivity from the backplane to a separate circuit board to which the Nixie tube display elements are connected, and to the keyboard assembly. 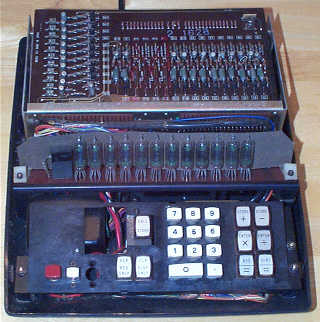 The Insides of the Commodore 1121

The 1121 operates conventionally for a machine of the time, but chooses somewhat different nomenclature for the key caps, and has memory register functionality that is a little different than most. The "basic four" function keys are labeled [ADD =] for addition, [SUBT =] for subtraction, [ENTER X] for multiplication, and [ENTER ÷] for division. Adding and subtracting work like an adding machine, with the result accumulating in the display. Multiplication and division work by entering the first number of the problem, pressing the appropriate function key, then entering the second number, then pressing the [ADD =] key to calculate the result. The [SUBT =] key can be pressed in place of the [ADD =] key, and the result will be negated.

The Four Logic Boards in the Commodore 1121 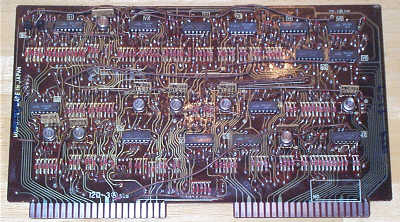 All of the IC's in the machine are made by NEC, and are in the uPD1xx/uPD01xx series. As mentioned before, there is a mix of can-type and DIP type packages used in the machine. These devices utilize early MOS IC technology, which required pullup resistors on the outputs. To minimize the discrete component count, a special hybrid device containing the pullup resistors was used with many of the IC's. This hybrid circuit module is located adjacent to most of the IC's. The working registers of the machine are made up of IC-based shift registers, with the architecture of the machine being entirely bit-serial. 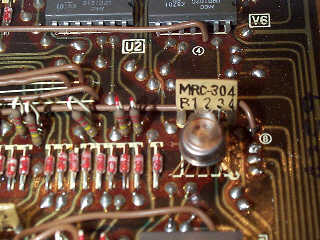 The Commodore 1121 uses a conventional keyboard with plastic keys with moulded in legends for the digit keys, and keycaps with plastic covers and paper legends for the function keys. The power switch is a bright red push-on/push-off button at the left bottom of the keyboard panel. A [ROUND OFF] key is located next to the power button, and appears to provide a rounding function when the calculator is in fixed decimal point mode. It doesn't seem to have any effect when the machine is in floating decimal point mode. Three small white plastic sliders are located near the display window to allow the user to mark off locations of where commas would be for easier recording of numbers in the display.

This machine is one of the faster machines in the museum. Addition and subtraction are virtually instantaneous -- the display doesn't even flicker visibly. Multiplication is also almost instant, however, a slight flicker of the Nixie digits gives a hint that the calculation does require a slight bit more time to carry out. Division is the slowest function, with 11 9's divided by 1 requiring perhaps 1/10th of a second to complete, with very little fanfare in the display accompanying the calculation. The machine does have some quirks in the way it operates. Full 12-digit dividends result in nonsense answers. There is no overflow indication on this machine at all -- overflows are simply discarded. Some division operations when in floating decimal mode can end up with incorrect positioning of the decimal point -- the digits of the answer are correct, but the decimal point location seems to get lost in the process. Running the same calculation in fixed decimal mode gives the correct answer. Division by zero results in all of the decimal points lighting up, and the machine ignoring all but the [CLEAR DISP ONLY], [CLEAR REG ONLY] keys, or pressing a digit key. Pressing a digit key results in a non-deterministic number showing up on the display, and wrong results in calculations until the machine is cleared.