The Singer/Friden 1160 was developed using integrated circuit technology to basically re-implement Friden's first electronic calculator, the transistorized Friden EC-130. The 1160 was introduced in early-May, 1969, followed shortly thereafter with the 1162 in the latter part of May. The 1160 benefitted from the use of snall-scale bipolar integrated circuits to dramatically reduce the size, weight, power consumption, and in a tremendously competitive market, cost.

The 1160 was the beginning of what became the 116x-Series of CRT-display electronic calculators from Friden. The series included the 1160, the 1162, and the 1166. The series of machines sold well into the early 1970's, with many thousands being sold. The machines are relatively uncommon today, though examples can still be found here and there, and generally, unless they have been subjected to really poor storage conditions, are not too difficult to get running again. The machines were built with quality components, including large, computer- grade power supply filter capacitors which seem to age relatively well. The CRTs also tend to be pretty sturdy, and unless subjected to excessive shock tend to work OK. Heavily-used machines may show signs of some burn-in, especially on the 1160 and 1162 which do not suppress leading zeroes. The most common issues with the machines are sticky keyboards due to old lubrication drying out and getting gooey; CRT drive circuitry that is out of adjustment due to drifting components; problems with the high-voltage (roughly 3,000 volt) power supply for the CRT; and lastly logic power supply issues. The IC's used, other than a few custom IC's, are still relatively easy to acquire today, as are most of the other components. The 116x-series of machines are considered reasonably collectible because of their CRT display, which is a more novel display technology, used in a number of notable calculators including Friden's first electronic calculator, the Friden EC-130, as well as Hewlett Packard's notable 9100A and 9100B calculators.

The Model 1160 Identification Tag on the Bottom of the Chassis

The 1160 and 1162 calculators were initially manufactured at Friden's San Leandro, California factory. In the summer of 1970, Friden began electronic calculator production at a brand-new factory in Albuquerue, New Mexico. This plant produced all three of the 116x-series calculators, but the last of the series, the 1166, was only produced at the Albuquerque plant. 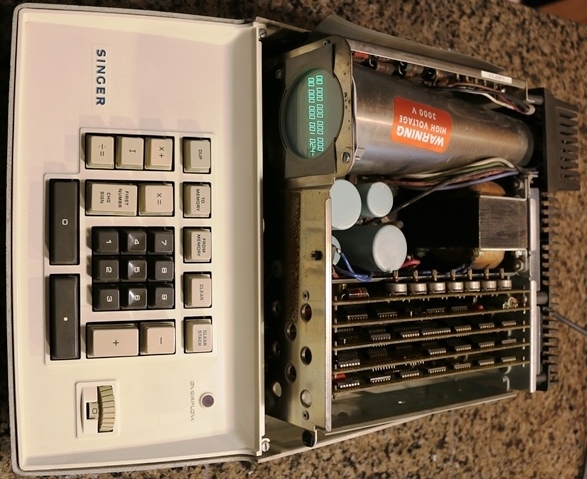 The 1160 shares the Cathode Ray Tube (CRT) display technology used in the earlier EC-130 calculator, but uses a smaller CRT (Westinghouse Type 3WP1), and thus only displays the lower two levels of the four-level RPN(Reverse-Polish Notation) stack due to the smaller size of the display tube. The smaller CRT further helped to reduce the physical size (and weight) of the calculator. 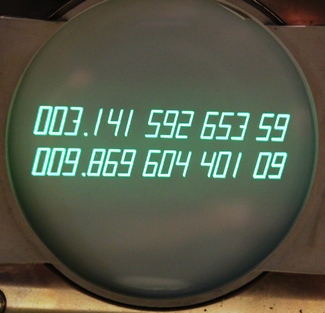 A major difference between the 116x-series calculators and their predecessors is that the digits on the display are grouped in threes (except while entering a number) to make reading and recording results easier for humans. The bottom register of the stack, where numbers are entered, does not group the digits in threes, nor is the decimal point displayed as numbers are being entered. For example, entering 123.456 shows up as "00000000123456" until the [FIRST NUMBR/CHG SIGN] key is pressed, then the digits become grouped in threes, and the decimal point is displayed in the selected position. This blind input of numbers with no decimal point displayed takes some getting used to as the user must trust that when the decimal point key is pressed, it is indeed being recognized. This inconvenience was eliminated in the 1166 follow-on, providing full floating decimal input and display of the entire number entry, including the decimal point.

The 1160 provides the usual four math functions along with a store/recall memory register. The machine has a capacity of 14 digits plus sign, one more digit than the Friden 130 it was patterned after. Decimal point location is fixed, and is set by a rotary thumbwheel that allows selection of decimal point location from 0 to 11 digits behind the decimal point. 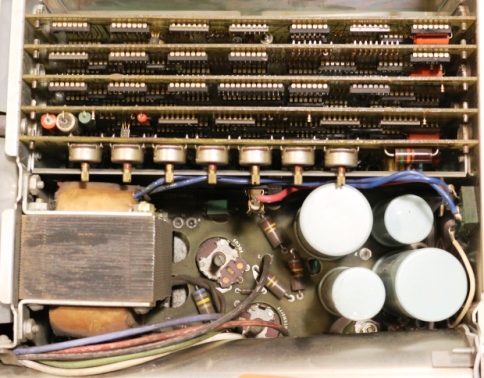 The keyboard is a miniaturized and somewhat less precisely manufactured version of the silky smooth, yet very complex mechanically encoded keyboard used on the first-generation Friden electronic calculators. The encoding mechanism is somewhat different, using rotating rods actuated by the encoding bars, rather than sliding bars of the 130. The result doesn't have quite the feeling of quality of the keyboard in the first-generation calculators. The keyboard panel of the 1160 is made of plastic, as opposed to the metal panel of the EC-130, further adding to the reduced feeling of quality in the 1160.

Like the earlier machines, when a key is pressed, it is mechanically locked in the down position until the operation is completed, by virtue of a solenoid-activated mechanism. For very quick operations, such as digit entry, the period the key is locked is so short that it isn't really noticible, however, for longer operations such as multiplication and division, the delay is definitely apparent. During the time the operating key is locked down, the rest of the keys, with the exception of the [CLEAR] and [CLEAR STACK] keys, are physically locked from being depressed, to keep the operator from pressing keys while the machine is still busy. For a fast operator, this can take some getting used to. The 1160 forsakes the combination overflow indicator/unlock keyboard key of the first-generation calculators, opting instead for a keyboard panel-mounted indicator that lights to indicate an overflow condition, and use of the [CLEAR STACK] key to reset the machine and unlock the keyboard. 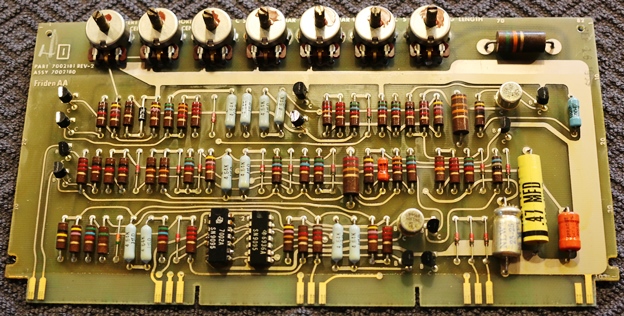 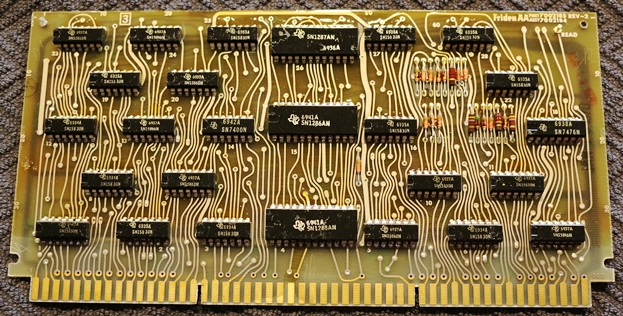 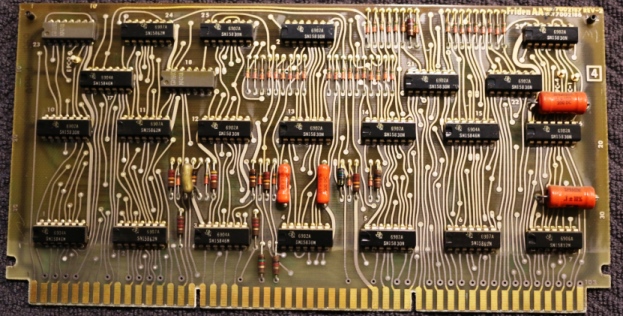 The 1160 uses off-the-shelf bipolar small-scale integration IC's for the most of its logic. The majority of the chips found in the 116x-series calculators are made by Texas Instruments(TI), and are from the company's DTL (Diode-Transistor Logic) SN158XX-series. Compatible DTL devices from Fairchild(DTµL-Series) and Motorola(MC8xx-Series). Along with the DTL devices, there are also a number of newer-technology TTL (Transistor-Transistor Logic) devices from the ubiquitous 7400 family, developed by TI and eventually made by just about every American chipmaker under license from TI. Most of the TTL chips are 7373, 7474 or 7476 dual-flip flops, with a few other 7400-series devices in the mix. The TTL devices used were primarily made by Texas Instruments, but equivalent devices from Signetics can also be found on the boards. Along with the off-the-shelf IC's used in the 1160 use a number of custom bipolar ICs manufactured by Texas Instruments for Singer/Friden.

One set of these custom chips is located on the arithmetic-logic unit (ALU) circuit board (Board #3). The chips have part numbers SN1286, SN1287, and SN1288. Each chip mimics one of the three switch-tail ring counters used in the "three-counter" architecture of the Friden 130, whose basic electronic architecture carried forward to the 116x-machines. The SN1286 chip contains the A Counter; the SN1287, the C Counter; and SN1288, the D Counter. Each of the counter chips contains five J-K flip flops, along with a number of logic gates that control the counting and transfer functions of the counter. The devices are built using TTL technology, which, at the time, was TI's premier bipolar IC technology.

The TI-manufactured NAND gate chips on Board #1

Another set of custom chips is used on circuit board #1, which contains circuitry related to the generation of the display. This custom chip was made by Texas Instruments for Singer/Friden, and has part number SN9095. This chip is used twice, and they are the only integrated circuit devices on the board, with the remaining circuitry implemented with discrete components. The SN9095 chip contains four NAND gates with special characteristics that weren't available in the standard 7400-series TTL Open-Collector NAND gate ICs.

The 1160 Card Cage and Backplane

The 1160 uses a total of 83 IC's, along with a significant count of transistors, diodes, resistors and capacitors. The logic of the machine is spread across five circuit boards which are plugged vertically into a backplane in the bottom of the chassis made from an etched circuit board. The backplane board also contains most of the power supply circuitry, including the generation of the high voltage (~3KV) used by the CRT. An additional circuit board mounted beside the CRT provides the analog circuitry that drives the CRT display, including deflection amplifiers and electron beam drive circuitry. 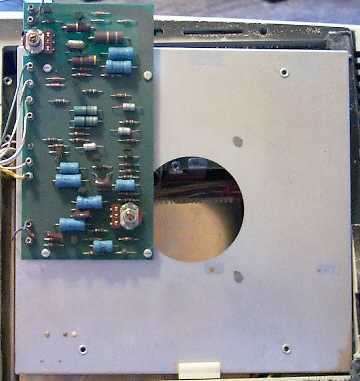 Even though integrated circuits replaced the discrete transistor logic of the earlier 130 machines, the 1160 still uses magnetostrictive delay line technology for storing the working registers which include the four level stack and the memory register. The delay line of the 1160 is contained in a sealed aluminum housing in the base of the machine, as in the 130, but the whole assembly is significantly smaller that its earlier counterpart. The delay line in the 116x-series machines is simplifed in design from that used in the Friden 130, with less mechanically complex transducers and simplified driver circuitry. The delay line material is a Beryllium-Copper alloy wire approximately 40-feet in length, with a smaller wire diameter than that used in the 130, allowing the overall delay line package to be about two-thirds smaller in volume than the 130 delay line. The delay line in the 116x-series calculators has a delay period of approximately four milliseconds, one millisecond less than the delay period of the Friden 130. 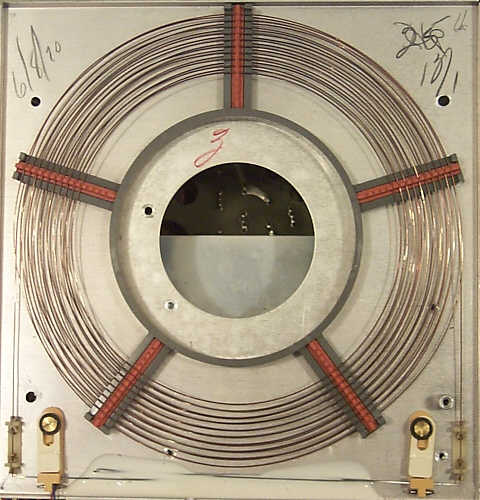 View of the Delay Line

The delay line was still needed, as the use of the four-level Reverse-Polish stack architecture, first used in the Friden 130, simply required too many bits of storage to be economically implemented with the off-the-shelf bipolar integrated circuit technology of the late 1960's. Considering a capacity of fourteen digits plus sign, with five registers (four in the stack, and one memory register), which each digit represented by up to nine pulses in the delay line, a solid-state replacement for the delay line would require a shift register with roughly 676 flip flops. If executed with TTL 7474 flip flops, it would have required 373 ICs. Clearly, the delay line was still a much more economical solution for the register storage in the Friden 116x-series calculators. 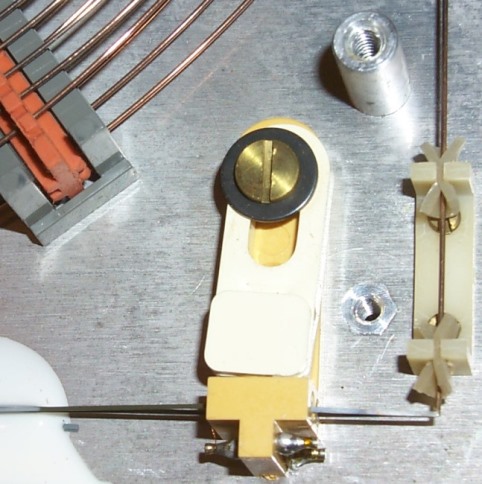 For more information on the way that the 1160 calculator and the its first-generation predecessors keep track of the registers using magnetostrictive delay line technology, please have a look at the Friden 130 exhibit.

Though implemented with integrated circuits, the 1160 isn't dramatically faster than its transistorized predecessor. In practice the 1160 is only marginally faster than the 130. The basic clock frequency of the 116x-series calculators is 2.8MHz, but this fundamental frequency is divided by four, to 700KHz, as the master clock frequency. This is over double the 333KHz operating clock of the EC-130. In spite of this, the 1160 doesn't seem to reflect a commensurate speed advantage over the transistorized Friden 130.

The Overflow Indicator on the 1160 Calculator

All nines divided by one (e.g., 99999999999999 ÷ 1) takes a shade over one second. Seven nines times seven nines (e.g., 9999999 X 9999999) takes just about 1 second. During calculations, the display is blanked, and the function key is locked down until the operation is complete. Overflows light the OVERFLOW indicator and physically lock the keyboard until the overflow condition is cleared with the [CLEAR] or [CLEAR STACK] keys. Division by zero results in the machine looping forever with the display blanked and the keyboard locked, with the only recovery possible (besides power-cycling the machine) being depressing the [CLEAR STACK] key.

The next generation of calculators from Friden were designed and manufactured by Hitachi in Japan, with Singer/Friden logos placed on them for sale by the Friden division of Singer. The 1160 and the other machines in the 116x-series and the 115x-series printing calculators are the last of the legacy that began with Robert Ragen's vision for the Friden EC-130.